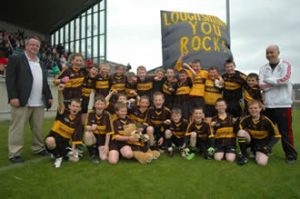 Our G.A.A. teams play in the Fingal league beginning inn March every year. Training for the Junior and Senior boy’s team usually kicks off around October time on a Monday afternoon from 2.45 p.m. to 3.45p.m. These sessions are coached by Anthony O’Flanagan, Ross McAuley and Rory Keary who are a massive help in development of G.A.A. skills for our students. We usually train at the local soccer pitch weather permitting. The local club Loughshinny UTD are extremely supportive and we hope to play some of our home games there this season. As you can see we have had great success over the years with our teams but our prime objective is to get children active, playing and learning the skills of the game. We also have great support from our local G.A.A. club St. Maurs with continuous coaching throughout the year on Tuesdays for all age-groups in our school. 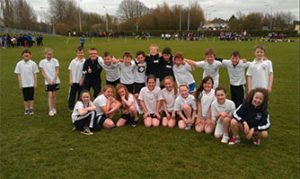 We do a little bit of cross country running in the mornings at 9.05 a.m. This run is open to all children from 1st to 6th classes and the emphasis is on fun, as well as developing their fitness.

Following on from this the Fingal county council’s sports officer offers us the opportunity to take part in the Cross Country Athletics league.

The league has, a participation and fun based ethos and provides an excellent opportunity for children of all levels to get involved in athletics and keep up their fitness. There will be four race days spread over the school year, beginning in October. Furthermore participating schools are invited to a special event, THE FINGAL FINAL, which will be held in Morton stadium (Santry stadium) in April 2016.

The first three events will take place in Newbridge House with the final event taking place at Morton Stadium in Santry where each child receives a medal to acknowledge their participation.

If you would like your child to take part in these races forward 20 Euro to us before the first race. This 20 Euro covers the entry fee for all four races and a contribution towards the buses required to bring the children to the events.

Soccer is very popular in the village and we try to facilitate some training through the F.A.I. for our students. Last year we ran a skills training session for our Junior classes after school and hopefully we will be offering a similar block of sessions this year.

We also enter the girls and boys in the F.A.I. 5 aside competitions every year that are held at Irishtown.

At the end of each year we run a fun mini-blitz for all the children from 3rd to 6th class with the emphasis on taking part and having fun. 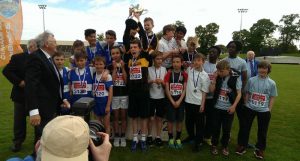 Every year we enter our school in the Cumann na mBunscoil Santry sports day which gives our sprinters and relay teams a chance to shine. 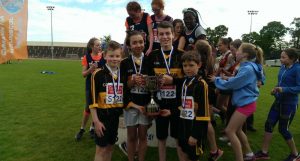 We have enjoyed many fabulous days at Morton Stadium none better than last year when we returned from a blistering day with our first ever victory in the relay.Our winning team Ben Cohen, Conall Fynes, Noah Campbell and Robert McCullough were fantastic and we also had a victory in the individual sprint event with Conall Fynes. 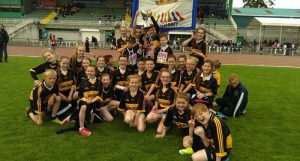 Olympic handball was initially brought to Loughshinny many years ago by Mr Neil O’Donnell and it has been part of our school sporting activities ever since. It’s a six a side game similar to basketball rules but using hockey style goals. We have a permanent court in the yard and Ms Byrne organises a school league that runs at break times throughout the school year. The league is for boys and girls from 3rd to 6th class and the results are posted each day outside Ms Byrne’s room.

The game is fast and competitive and teaches the children many skills that are transferable to other sports. All the teams have fun names that the children make up themselves and the emphasis is always on having fun. Some of the teachers referee the matches at the 12.30 break and later in the year we engage in a few friendly blitzes against other school.

Swimming is now an integral part of our curriculum and as a harbour village community we feel a very important skill for all our students to learn and practice as well as a fantastic way to keep fit. We offer swimming classes to our senior classes 3rd to 6th and this year they will run in 8 week blocks on Thursdays starting on Jan 19th 2016 at Sportslink.

Our swimming sessions are generously subsidised by the hard work of the Parent’s association and offer great value for such a valuable activity. It’s also worth mentioning that the more children that avail of the opportunity to swim the cheaper it will be for all.

Yoga is also subsidised by the P.A. for the Junior classes in our school. We usually do a block of 6-8 weeks in the Spring term where the children get expert coaching from a qualified Yoga instructor.

During the Spring and Summer months we get some valuable coaching from the coach in Rush Cricket club. Blitzes are organised between schools and we also enter the Leprechaun cup each year with our senior classes.

Rugby is a very popular sport in the North county and we are lucky to have an expert coach from Skerries Rugby Club, Andrew Carabini, who coaches our 5th and 6th class children. Again the emphasis is on fun and learning the game. Michael is great with the children and organises blitzes at the end of the year between some of the local schools.

Sport is all about being active, healthy and fit. We hope that exposure to sport in our school will encourage the children to keep playing and maybe join some of the numerous sports club available to them in the area.

In 2012 was the first time in many years that we had a show jumping team representing St Brendan’s N.S. Our last team was nearly 20 years ago when we were represented by Louise Clarke, Louise Farrelly , Dawn and Debbie Todd.

During this 2012 season, with the help of Ado McGuinness we were able to compete in events at Killossery Stables and we had a very successful year. Our team included Sarah Mc Guinness, Tadgh Mc Guinness and Aisling McGuinness. All of last years team are now in 6th class so we are hoping to have another great year, all going well, before they all move on to secondary school. We have a new member on our team this year, Tara Murphy from 3rd class, and we wish them every success for the coming season.

Back to the top.